Generating electricity from domestic solar panels, small wind turbines or micro hydro is increasingly practical and popular. If you're on the mains grid, you sell the extra electricity. If not, you secure your electricity supply without a petrol generator and the electricity is carbon and cost free. 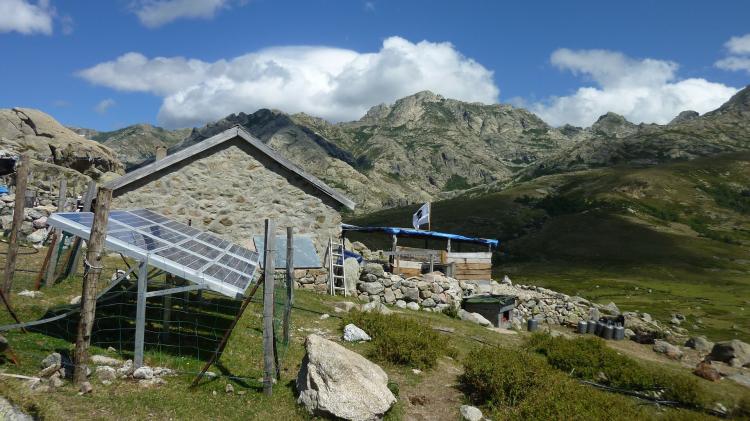 Microgeneration is the small-scale generation of electric power by individuals, small businesses and communities to meet their own needs, as an alternative or supplement for the centralised grid. The main technologies are small-scale wind turbines, solar PV systems and micro hydro. Another generation technology, micro combined heat and power, is covered in Action 36: 'Change your heating'.

Most houses are connected to the mains electricity grid, and that's generally the default source of electricity. However, in some countries a lot of homes in remote areas have no mains electricity connection, while some people aspire to an off-grid or fully self-sufficient lifestyle. Whether you are on-grid or off-grid has a crucial influence on your micro-generation options.

If you are on-grid, your cheapest and easiest option is to reduce electricity demand via energy efficiency. For off-grid, most generation systems won't be able to produce enough electricity for your household without careful demand management. So either way, before investing in any new technology find out how exactly much energy you currently use and do all you can to reduce it.

On-grid systems are the simplest, most cost-effective. They must connect to the grid to function and send excess power generated back to the grid. You usually get paid for this electricity by the utility company and may also get a government tariff. However, they do not provide power during a grid outage.

Off-grid systems mean you store your power, usually in batteries. This allows protection if the grid goes down. However, they can't fully power most homes; the cost and volume of batteries would be prohibitive. So an off-grid system requires high efficiency and careful energy management. The batteries can also have a high climate impact and contain toxic chemicals, so research them fully. Generally, off-grid systems are not cost effective when on-grid is available. But if you don't have access to the grid in the first place, or don't want it, they're your only option. 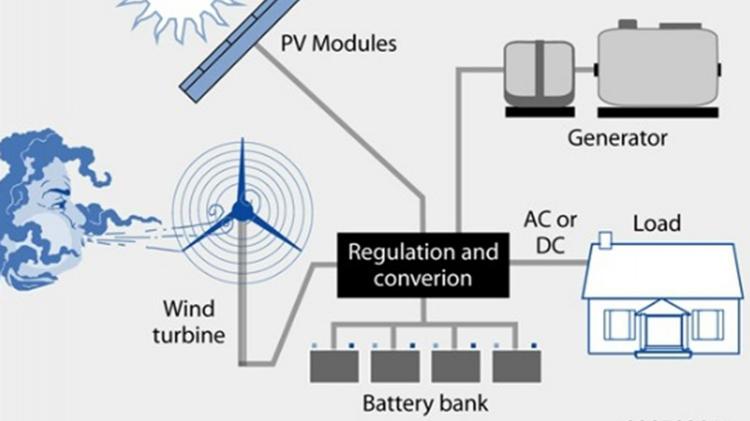 In addition to the electricity generating plant described below, infrastructure for energy storage, power conversion and hook-up to the grid or home are needed. A major issue with off-grid solar and wind systems is that the power is often needed when the sun isn't shining or the wind is calm. Where such a system is not connected to the grid, it usually uses deep cycle batteries. Other, less common means of energy storage include hydrogen fuel cells, flywheel energy storage, pumped-storage hydroelectricity and compressed air tanks.

For converting DC battery power into AC, or for feeding excess power into the grid, an inverter is required. Groundings, isolator switches and surge protectors are needed for safety, and the micro-generation system needs connecting to either the grid or the household electricity system, or both.

The best sites are those with an average annual wind speed of at least five metres per second and with an unobstructed flow of wind. Horizontal or vertical axis turbines, mostly free-standing on poles but sometimes mounted on buildings, can generate between 1 and 6kW depending on size. However, power output is dependent on wind speeds which fluctuate throughout the day and the year. A well sited 6kW installation could save over five tonnes of CO2 per year.

Solar PV modules convert sunlight into electricity for use in the home or to export to the grid. Typical domestic systems are around 2.2 kW in size and can provide around 1,850 kWh a year, over 40% of the electricity used by a typical household. This technology is one of the simplest to install as it has no moving parts. A typical 2.2 kW system could generate substantial savings but you need about 15 square metres of sunny, unshaded roof or other appropriate space. Solar shingles are also available. Limited electricity is provided in winter. A 2.2 kW system will typically save around 1 tonne of CO2 per year in the UK.

This generates electricity from the flow of water, using a water turbine. Micro hydro generally provides a very steady supply of power; the only hazards being drought and freeze. Pico-hydro systems generate less than 5kw, suitable for a single home, but unless you have an old watermill or a stream with a steep fall (head), it’s unlikely to be practical. Plans for constructing such DIY systems can be found on the internet. At community level turbines ranging from 200kW to 10 MW are very practical if a river is available, and micro-hydro is growing rapidly around the world. See Action 37: 'Join a climate action group' for more information on community level power generation.

Do a home energy audit

Employ an expert to assess your energy generating options

EARTH CARE:
Generating your own electricity takes pressure off the central grid

FAIR SHARES:
Harnessing natural sources of power as an individual creates more to share with others

PEOPLE CARE:
Off-grid power is the only option for many people around the world
Sustainable Development Goals
Resources
Resources for children: