Adapted from 20 Ways to Conserve Water at Home

We can all usefully reduce our water use.  Even if you’re not living in a drought-stricken region, cutting back on water use means a lower utility bill and helps conserve a precious resource. Even a few small changes can add up to saving hundreds of gallons each year!

1    Taps: Turn off the tap while brushing your teeth. Old taps flow at up to 2.5 gallons/11 litres per minute; that's 4,000 gallons/18,000 litres a year from 4 minutes of daily teeth brushing! Install new taps or add tap aerators to taps to reduce flow by 1.5 gallons/ 7 litres per minute.

2    Flushing: Around 30% of domestic water use is from flushing toilets. So flush less often, saving up to 3.5 gallons/ 16 litres per flush; 'if it’s yellow, let it mellow'. Further reduce your flush usage by sinking a half gallon jug of water in the toilet tank or investigate getting retrofitting a dual flush.

3    Fix leaks: Whether you go DIY or hire a plumber, fixing leaky taps and pipes will save a lot of water. Replace washers in old, dripping taps.

4    Shower: Older shower heads can use as much as 5 gallons/ 22 litres per minute. Speed things up in the shower, and shower less often.

5    Efficient fixtures: Aerating taps, a low-flow toilet, an efficient shower head, and an environmentally rated dishwasher and washing machine can half domestic water use.  Check out the simple technologies that can help you reduce usage. 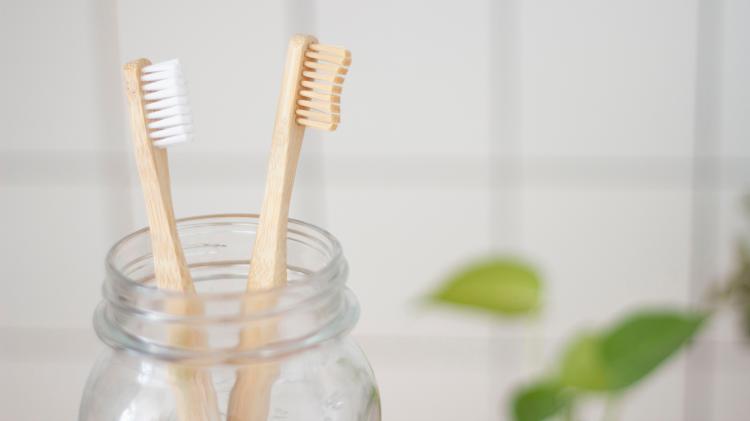 6    Car wash: If you feel compelled to wash your car, take it to a car wash that recycles the water, rather than washing at home with the hose.

7    Garden: Shrink your lawn or replace it with something edible or with plants that thrive in drought. Water outdoor plants in the early morning; cooler temperatures mean losing less to evaporation.

8    Dish washing: A modern dishwasher uses 5 gallons / 22 litres, a lot less water than hand washing if you run the dishwasher only when full. If hand washing, fill up your bowl with water instead of letting it run the whole time. Don't leave dirty dishes to harden overnight and wash glasses and clean(ish) items first.

9    Washing clothes: Reduce the number of loads you wash. Only wash clothes when they smell or look dirty and wear old clothes or an apron for dirty jobs, cleaning and gardening.

10  Compost toilets: They use no water at all. Not practical for most urban homes and humanure requires careful management, but good in a self-build or off-grid house. Urine is sterile and full of nitrogen, so collect in a bucket and add to your compost heap.

Two important ways to reduce water consumption beyond the domestic level are to cut your electricity use, as power stations are a major user of water, and to change your diet. The same principles for decreasing the carbon footprint of your diet (i.e. Action 42: 'Eat local, seasonal food' and Action 6: 'Eat less meat and dairy') also relate to decreasing your water footprint. 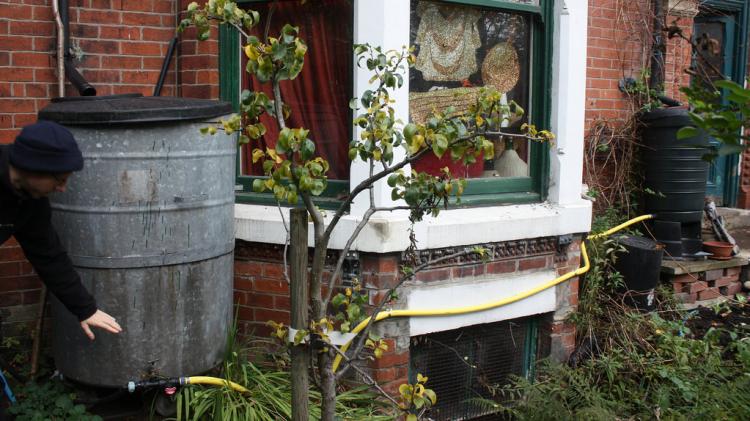 The first key strategy is to reuse water which has been used once but is not polluted. The second is collecting and using rainwater.

1    Use a shower bucket. Put a bucket under the head while you wait for your shower to heat up. You can use the water for flushing the toilet or watering your plants.

2    Reuse grey water. Check to make sure that this is legal where you live, but you may be able to re-route the run off from your dishwasher and shower to your toilet tank. (It's not good for the garden due to fats, detergents and food scraps).

3    Re-use your cooking liquid. Drain your pasta or vegetable water and use it again to cook something else. Once it cools, use it to water your plants.

4    Install a rain barrel. Rainwater harvesting is a great way to keep your plants hydrated without turning on the hose. The barrel can have a simple tap or be connected to a drip irrigation system.

5    Install a water harvesting system. This is a large investment of time and money, but if you live off-grid or have extensive crops it will make a huge difference. A DIY or commercial system can connect harvested rainwater to your domestic pipes or to irrigation. For more details, see Action 13: 'Manage water in the landscape'.

Harvest rainwater from your roof

Implement a water use reduction plan

EARTH CARE:
Water is not a finite resource and we cannot take it for granted, wherever we live

FAIR SHARES:
In some parts of the world, clean water is a luxury, not a commodity

PEOPLE CARE:
Globally over a billion people do not have access to clean water
Sustainable Development Goals
Resources
Resources for children:

Water-harvesting tour of the Lancaster Homestead

Water use it wisely

Manage water in the landscape